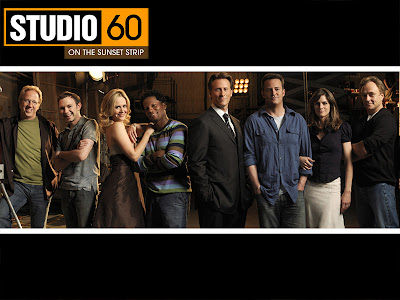 To whatever idiot at NBC who decided to cancel Studio 60 - What were you thinking???

There's a reason why a certain demographic is turning off their tv's and spending time on the internet or reading or whatever and it has nothing to do with piracy, illegal dvds or whatever other fantasy you can come up with for falling ratings. ..... It's because there is nothing but crap on TV.

Since the West Wing wrapped up (on a high like all good shows should), there has been a lack of intelligent dialog driven tv shows. From the first episode of Studio 60 that I watched I felt home - like a good friend popping over and saying stuff you know in your head before they even finish saying it.

Look we all know it's not as good as West Wing but there's not as much 'star power' as there was in West Wing either - I mean Martin Sheen walks into a room, makes a speech and even I feel like saluting him - He was POTUS.

Having said that Studio 60 was tackling some really heavy current issues as well. Something that no one else is able to.

So tell us where to send the peanuts and we will, but next year when you are sitting around the upfronts wondering why the apathy...remember this email.