Email ThisBlogThis!Share to TwitterShare to FacebookShare to Pinterest
photo by jimieye 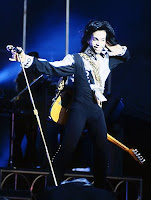 We were just discussing how copyright has been stretched and twisted so many times that it really just isn't designed properly to handle internet communications -- and a good case in point may be the funny little spat we covered a few weeks back between Prince and Radiohead. If you don't recall, Prince performed a cover of a Radiohead song at a concert. Someone in the audience videotaped it and put the video on YouTube. Prince's representatives demanded that the content be taken down under a DMCA request -- raising all sorts of questions. After all, Prince didn't own the copyright on the song. That's owned by Radiohead, whose lead singer wanted the video back online. Prince didn't own the copyright to the video either, since he didn't take it. So how could he use the DMCA to take down the video?

But, it's not that simple, apparently. As Ethan Ackerman details, as lawyers began to think about the situation, the more confused they got, noting that maybe there was a right under anti-bootlegging laws.
(more)... http://techdirt.com/articles/20080610/1651401368.shtml#comments

Love it - especially seeing Prince is being a prat lately (though I still love his music).