Email ThisBlogThis!Share to TwitterShare to FacebookShare to Pinterest
It's probably an automatic suspension because the twittersphere went crazy today talking about the Titans V's Steelers game tonight but my @LiveNFLchat twitter account has been suspended this afternoon even though I followed all of the Twitter API rules for 24 hour follow limits. 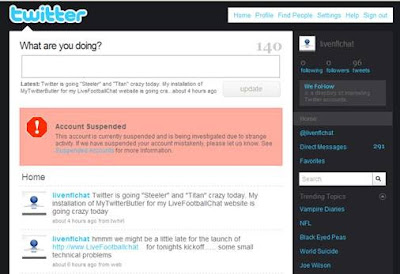 Like I said it’s probably an automated suspension but it’s hard not to feel that someone singled this account out because of my use of MyTwitterButler for the first time in 2 weeks.

I’m holding off raising hell for 24 hours and hopefully someone at twitter re-activates the account but this yet another example of why twitter needs to get serious about third party involvement now - either you want us adding value or you dont.

Followup: Well it appears that this was just random that my account got suspended and nothing to do with MyTwitterButler - however yet again a twitter employee is saying that you shouldn't be using the API to follow or unfollow users (see highlighted section below) LOL he even said we shouldn't be using third party apps to Tweet, though i'm sure that was just a typo...... can you imagine what would happen if twitter banned all third party apps from posting messages.

As I've said many times before if you dont want people to do this function via your api then remove this functionality from the api - until then i'm just playing by the rules that you've set. 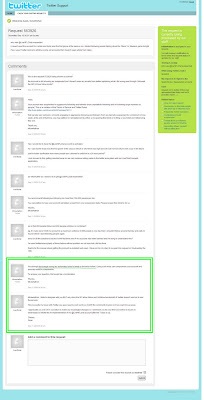 Well like i said turns out it was just a 'random' speeding ticket and had nothing to do with MyTwitterButler. The account has been re-instated.