Email ThisBlogThis!Share to TwitterShare to FacebookShare to Pinterest
Shoutout to my buddy Scott Schaffer aka The Pondering Primate. If you are in the mobile marketing space and dont read this guys blog then you are missing out.

Scott posted this morning about a QR Code campaign that was launched in London http://theponderingprimate.blogspot.com/2007/09/28-weeks-later-uses-qr-codes-for-dvd.html for the dvd release of "28 Weeks Later" that is taking the marketing space by storm.

(I had to see this movie while in London on a consulting project a few months back - lol hadn't planned on it but we were out at dinner in Leicester Square and saw it was playing and had to see it while in town (the movie is set in London in case you didn't know) ). 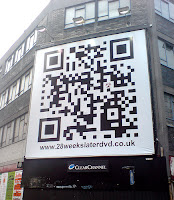 
If you are in marketing and dont know what a QR Code is then go do some research.

QR codes are the url of the future (i say that and groan as they have been common place in Japan and other parts of Asia for over 10 years).

Before you say this will never take off - go and look at how many url's you used in your last marketing campaign.....I'm sure there was some naysayer 10 years ago saying "there is no way I'm going to put that ugly WWW. in this beautiful print campaign" (shortly before he lost his job like the dinosaur he was).

Oh and if you feel lost and want a briefing to catch up - go check out my commercial profile www.cognation.net/profile and arrange a time for me to come in and run a workshop briefing for you and your team on QR campaigns and how they can be implemented for your marketing brands (or your clients brands should you really have already discussed this as a marketing strategy with them).


Cheers,
Dean
Posted by Dean Collins at 9:55 AM